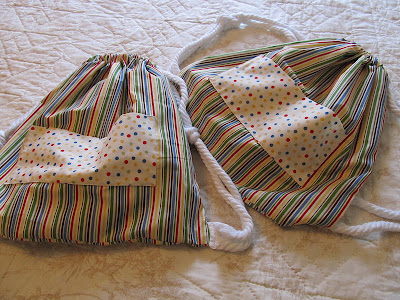 First finish of the new year - drawstring book bags for Mary Jean and Anna Rose, my twin nieces who are now 4. 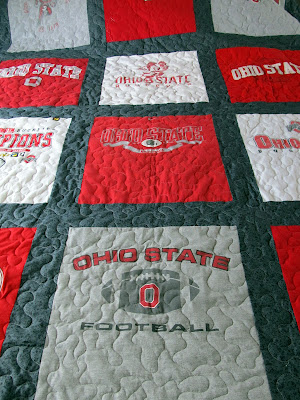 This Ohio State t-shirt quilt was made for Kevin as a Christmas gift. Terry Crosier quilted it for me. Made in 2011; quilted in 2012. 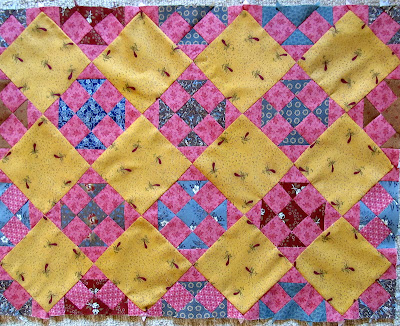 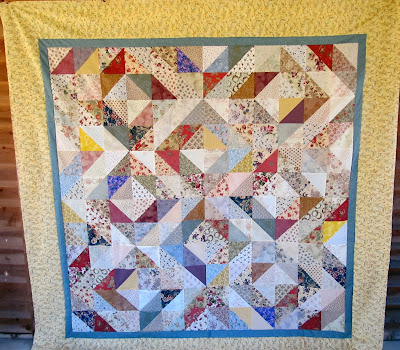 Chantilly, finished in Feb. 2012. All fabric from existing stash. Had been on my list for a long, long time.
5. 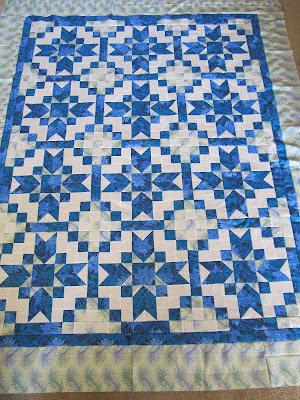 A mystery quilt made for Terry Crosier, who was to be leading a class at her guild's retreat. Made with 3 fabrics from the Westminster Fiber collections of the mid-2000's, and all in my stash. The star is called a Bradford Star. I really like how this one turned out. Finished March 11. 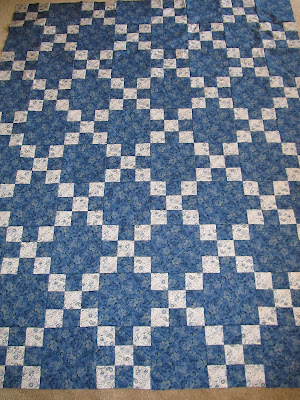 Single Irish Chain from the cover of Quilts and More, Winter 2009. Cut out on Saturday, March 10, and finished on Tuesday, March 13. Both fabrics were from my stash; the darker one did not have any info in the selvage; the lighter one is from 2006, called Victorian Botanicals by Pam Weeks for P&B Textiles.
7. 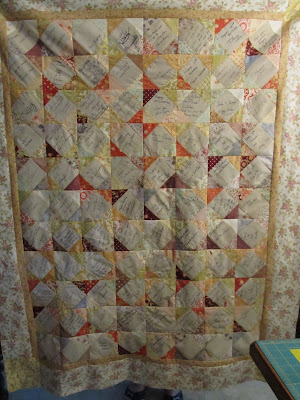 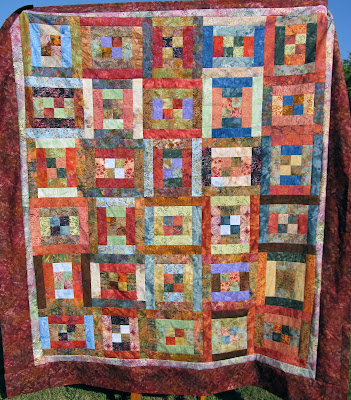 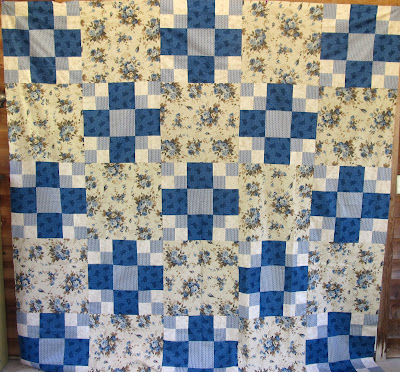 Victorian Roses.
All fabric from existing stash. I took a picture of a quilt on display in a store, and made up the pattern from the picture. Finished June 21. 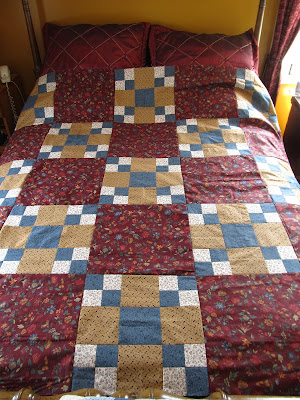 Thrifty.
The name of the block found after searching quilt books. Same pattern as #9 above. The 4-patch units are made with 3" squares, instead of 3.5" squares. Finished in early July. 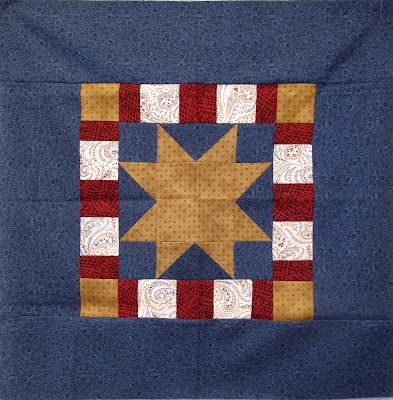 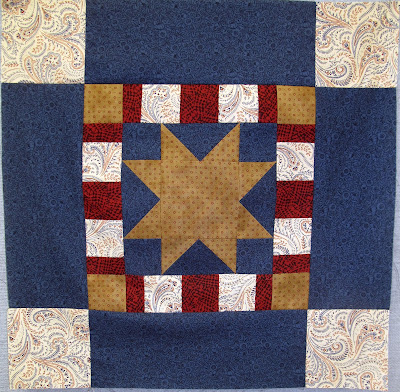 These two patriotic wall hangings were started at Quilt Camp on a whim, really. I found it in a Thimbleberries book and adapted it to this size. Made an extra one for giving away. 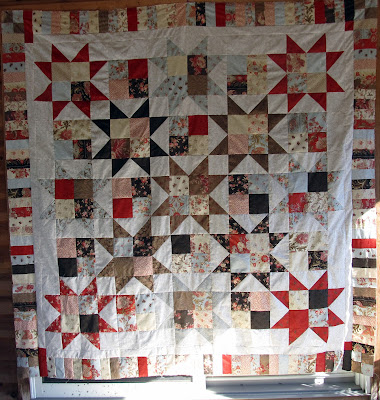 This is called Plan C, and was made with a Moda fabric line called Park Avenue. I made it to participate in a blog QAL called Another Year of Schnibbles. The pattern is from a Carrie Nelson book called Schnibbles Times Two. 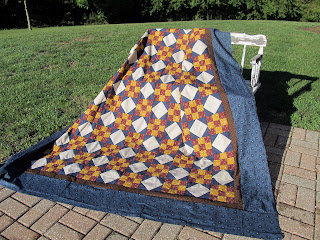 Nine-Patch Criss-Cross; made in August; from a Thimbleberries book; I made this pattern about 10-12 years ago in just 3 colors instead of 4. 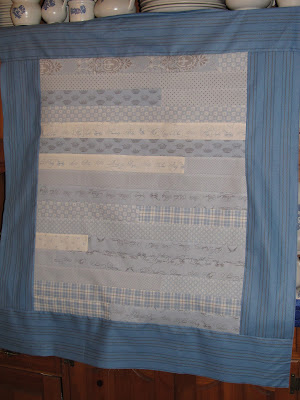 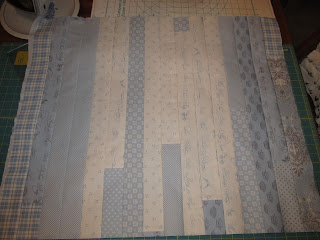 On a whim, I took a baby blue Jelly Roll with me to Sharon's for sewing one day near the end of Amanda's pregnancy with the idea of making her a baby quilt. I ended up making 2. We went to Old Town Fabrics to buy a border. For future reference, a Jelly Roll will make 4 baby quilts this way.The upper photo (15) is the one for Amanda; the quilt in the lower photo (16) will be saved for the next baby boy to be born. 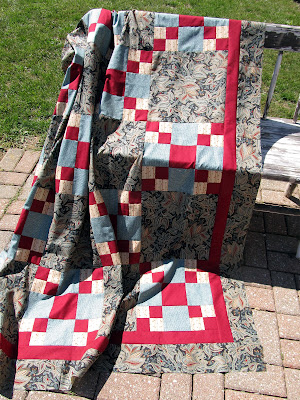 The final Thrifty, this time with the 4-patch units made with 2.5" squares. I like this one best, even though I did have to piece that outer border. (Quilts 9, 10, and 17 are all the same pattern, just different sizes.) 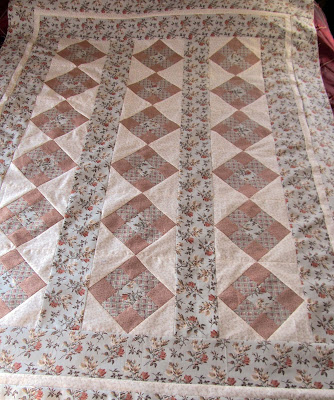 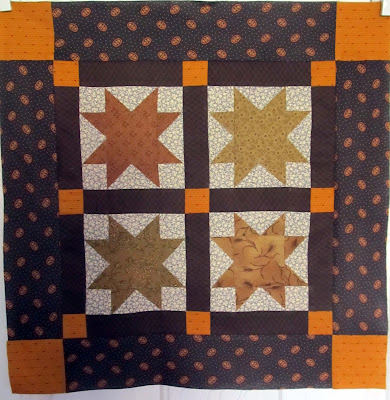 November Stars. A little wall hanging for the door. Made first of November. 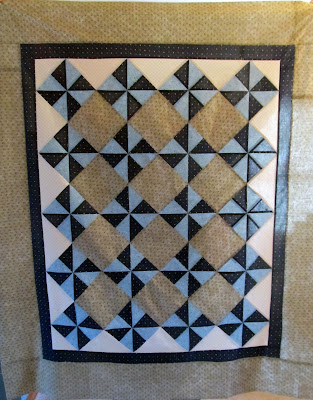 Pinwheel. Thimbleberries pattern.
Cut out on November 10, top completed on November 13.
All fabrics from stash. 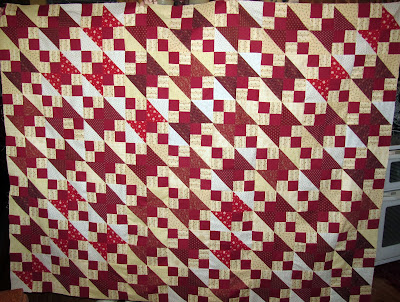 Jacob's Ladder. Made because I had lots of extra 4-patch units left over from the 3rd Thrifty.
(#17 above). All fabrics from stash. Finished in October. 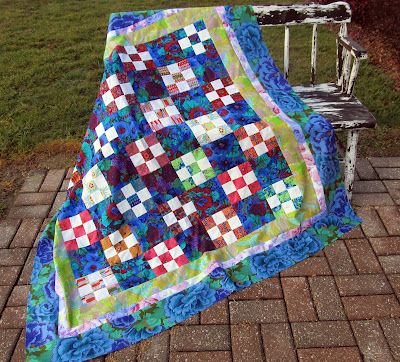 A free quilt, as it was borne of the scraps of previous projects. I took the 2.5" squares with me on our trip before Thanksgiving to have something to work on. On December 4, I put the outer border on for another finished quilt top. All the prints are from Kaffe Fassett; the white squares are random white-on-white that was also laying around.

This is called Broken Star. The pattern came from a book I have had since the 1980s. I began it over 20 years ago, got discouraged with the bias edges, put it away and forgot about it. Blogger friend Sue Abrey's longing to make a Lone Star quilt (which is a variation of this pattern) is what triggered my desire to finish this quilt. Quilt top completed Dec. 10, 2012. It's far from perfect, but it will do.