Note to viewers: I generally count a finished quilt top - a flimsy - as a finish. So technically, they aren't quilted. However, some quilts here are all-the-way finished, therefore, I will try to be sure to indicate this in the caption. 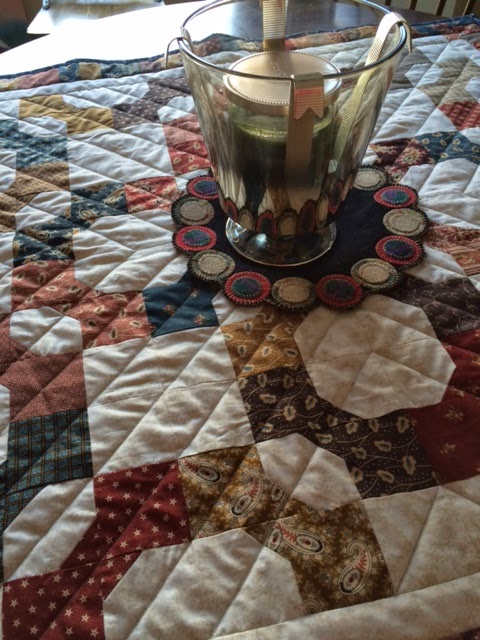 Sunday Best is a Schnibbles pattern by Carrie Nelson of Miss Rosie Quilts. The quilt top was made in 2010. I quilted it by machine and finished it in January 2015; it was on the UFO challenge for '14, but, alas, didn't get done in time. 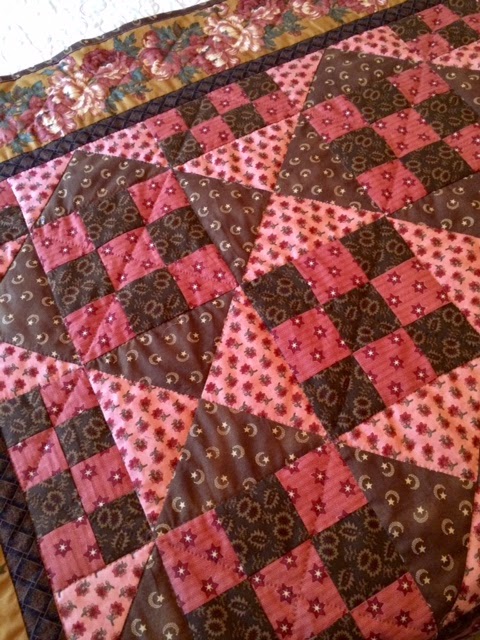 Brown and Pink was made sometime in the latter half of 2010. It went together very fast and easily. I began hand-quilting it in October of 2011 for my first History Day. I worked at it off and on (more off than on!) and finished it for the 2015 UFO Challenge on Sunday, February 8. Machine pieced; hand quilted. The pattern for the quilt came from an old issue of American Patchwork and Quilting. 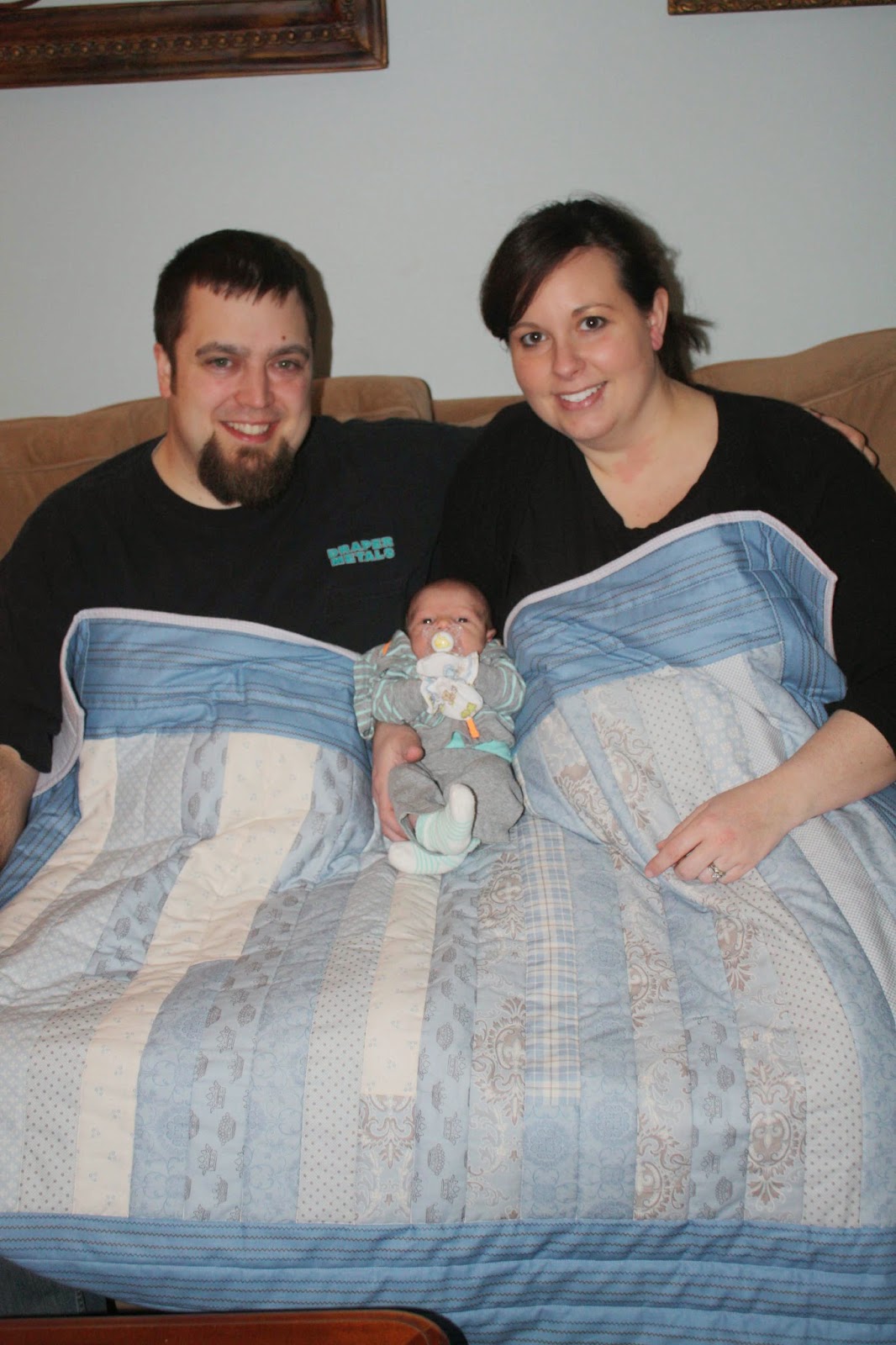 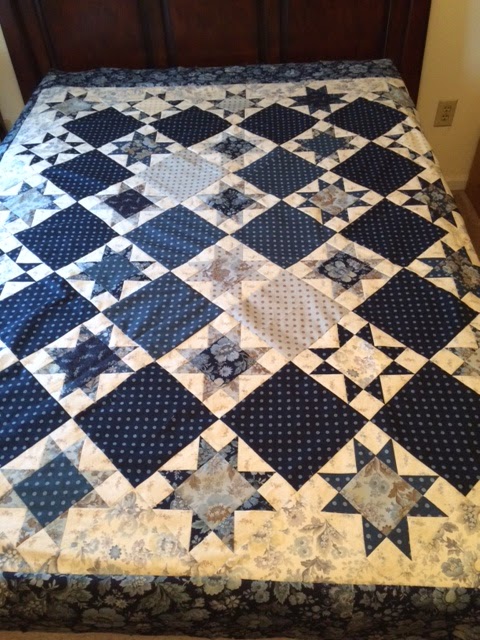 Snowbird Stars-made in early March. Sharon and I both had yardage of this gorgeous fabric and we didn't want to keep it stored away forever, so we agreed to make the Christmas Confetti quilt (retirement quilt) in March. It took me just 10-11 days to make; cut it out on March 3, and finished the top on March 14. 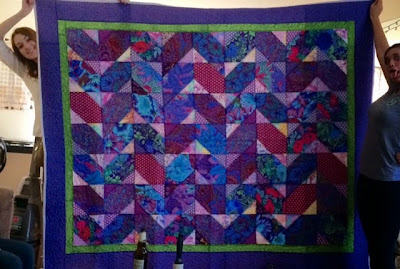 Emma's Purple Kaffe Quilt - Finished in April; given to Emma for graduation on May 2. 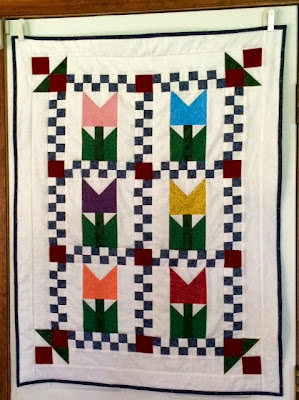 Tulip Wall Hanging - Started at Canter's Cave Retreat and finished soon after, as I wanted to use it for springtime. From a Thimbleberries book.

14.
Red and white Ohio Star quilt made in early September. Sharon and I both did red and white quilts at the same time, and this is my effort in that challenge. 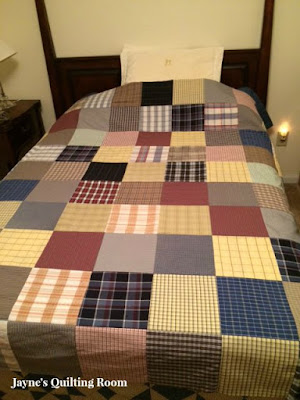 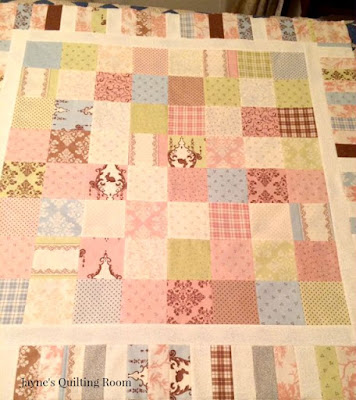 Everhart/Schrader baby quilt. Has yet to be quilted, but will be soon. 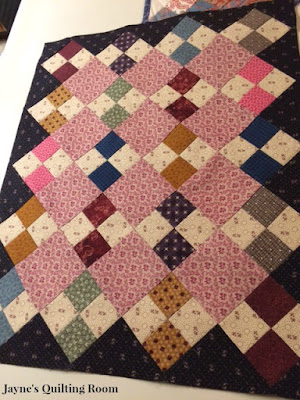 4-Patch Doll Quilt; made just before Thanksgiving from a picture I saw on Pinterest. 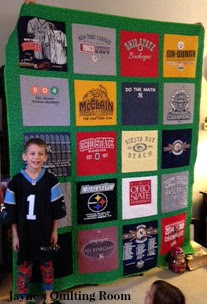 Baal t-shirt quilt; Debbie asked me at History Day and wanted it by Christmas. I had it done by Thanksgiving and delivered it in early December. Given on Christmas to grandson Zachary. 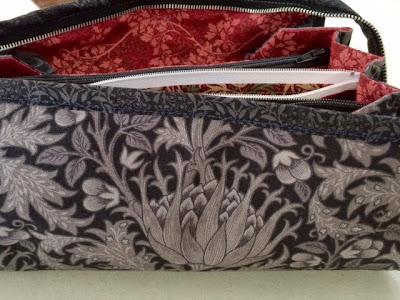 Zipper bag; made in the spring at Mary's Barn. Lots of fun, but I had a tough time figuring this out!
20. 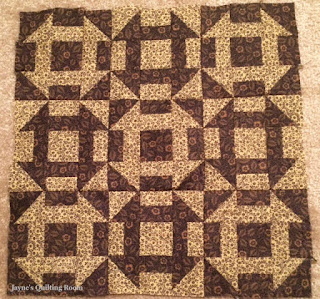 Churn Dash wall hanging. I'd had these two fabrics folded together for a long time, so when I finished with the Christmas bazaar in early November, I rewarded myself with a dive into a new project. I am hand-quilting this. 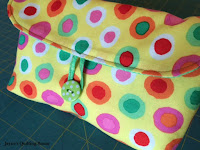 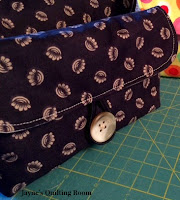 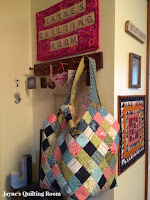 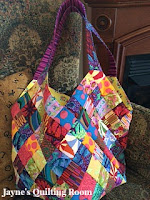 Two Mondo bags - one for Emma and one for Erin at Christmas. 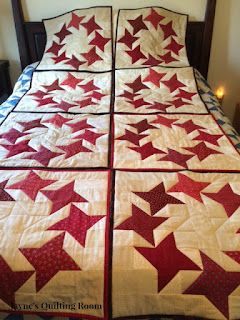 Eight Frienzie Wreaths - one for each Frienzie, including myself. Began mid-November and finished mid-December. 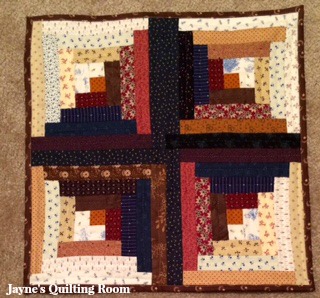 From my orphan block box, I found these 4 Log Cabin Blocks. I sewed them together and hand-quilted it; finished in time for Christmas and given to Mom to go with the earlier wall hanging. 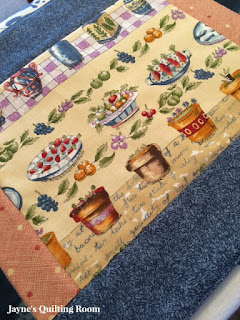 A set of 4 placemats shown here, and I made 4 sets. The panels in the center were from fat quarters I bought nearly 20 years ago. I saw interesting placemats at Ohio 1-Stop at the Nutter Center; this is my adaptation of them. 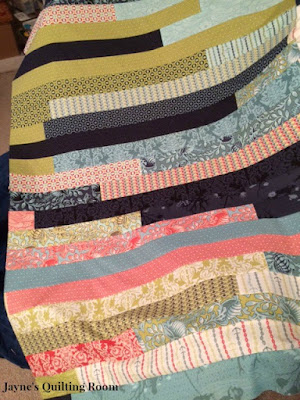 Race Quilt made with leftovers from Emma's Mondo Bag. 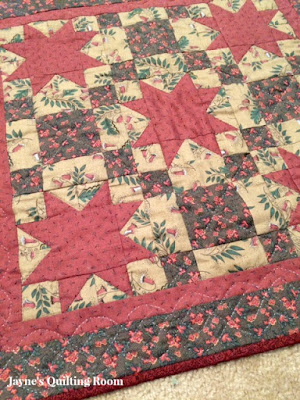 An ancient UFO that I uncovered when I tidied up the sewing room in late summer. I only had a few inches of border stitches to finish, so I did. 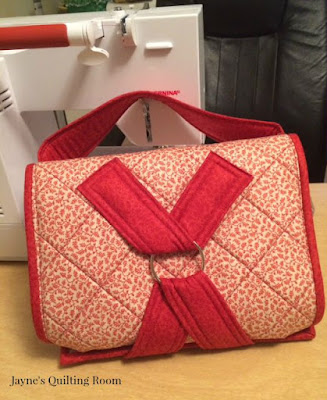 Project bag - Jan gave each of us the pattern and notions at the Canter's Cave retreat. I made this sometime in the summer. 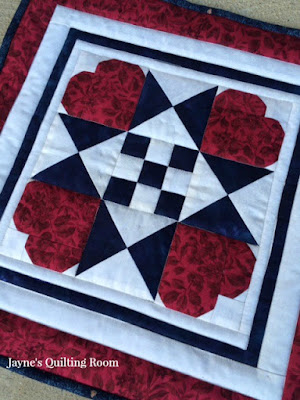 Finished this UFO wall hanging in July. Quilted on machine. 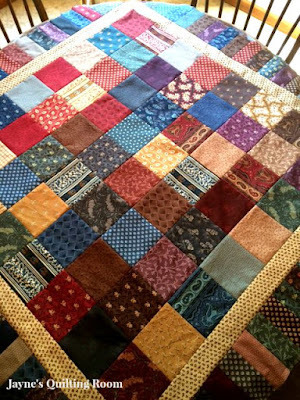 Second Triple Charm quilt - I taught this quilt in a few classes, so I needed several options for demonstration purposes. This is made with 3 Barbara Brackman lines by Moda.