For me, finishes can be of the flimsy variety as well as the entirely-quilted-and-bound variety. Mostly I make quilt tops (flimsies) and occasionally find the time and/or resources to quilt them. Let me know what you like - sometimes I sell them! 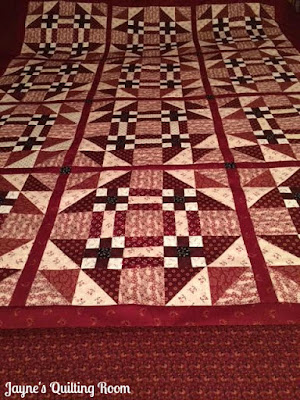 #1 ~ My January UFO finish is this kit called 19th Century Reds. I'd previously made all the blocks, and the sashing had been cut out. I had this finished by Jan 7. 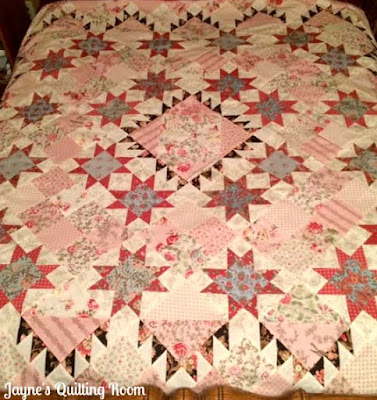 #2 ~ My first start-to-finish quilt of the year was Elizabeth. This quilt is one that took a good bit of fussing and planning, but the results make all so worth it. Pattern by Carrie Nelson of Miss Rosie's Quilts. Fabrics are all Moda - mostly French General and 3 Sisters. 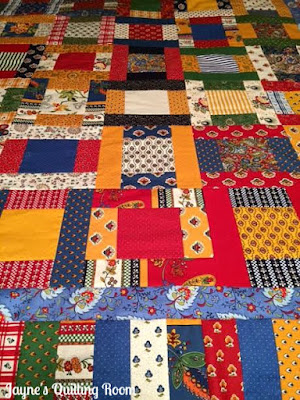 #3 ~ The February UFO is called Lorraine; I had the center together and held off finishing because I couldn't decide what to do about borders. Since I wanted to use just American Jane fabrics, I was limited in my options. I ended up with a blue from an older line mixed in with Lorraine and Savonnerie. It was finished on Feb. 9. 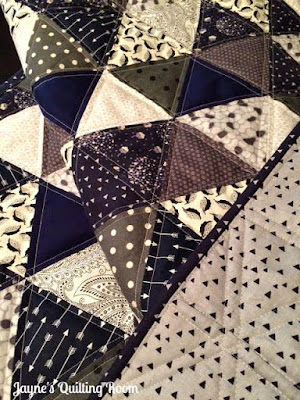 #4 ~ Baby Quilt for Emma's College Friend ~ The baby shower was scheduled for April, and Emma wanted to continue the tradition of giving a quilt. She bought the fabric mostly in Athens, but selected a few pieces from my stash, found an inspiration pic on Pinterest, and so we went to work. I finished it on my own in late Feb. 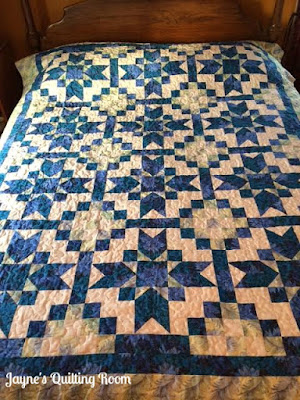 #5 ~  I turned a flimsy from 2013 (?) into a quilt when I had Bradford Star quilted at Terry's. We sent this quilt off to my brother- and sister-in-law who live in Lecanto, FL. 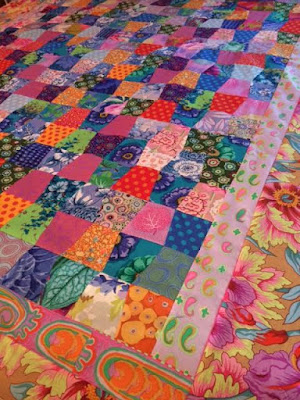 #6 ~ The March UFO was Small Tumblers. I had a mish-mash of tumblers in a tub; some were sewn together, some were just stacked up. Early in March I put the top together, and then spent about 10 days figuring out borders. I ended up with pastel purple inner borders and a gorgeous floral outer border. i am quite pleased with this flimsy. 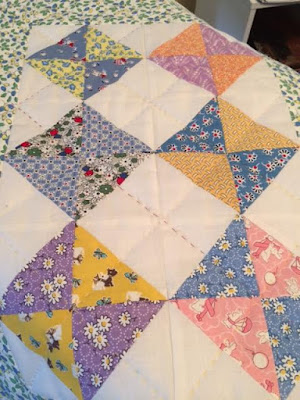 #7 ~ A little quilt top became a finished quilt top after hearing Corey Yoder speak on March 18 at Old Town Fabric Shop. This wasn't on my radar when the month began; I am thrilled to have a finish. This is made with remnants of an older project. I used 4 colors for big-stitch quilting. 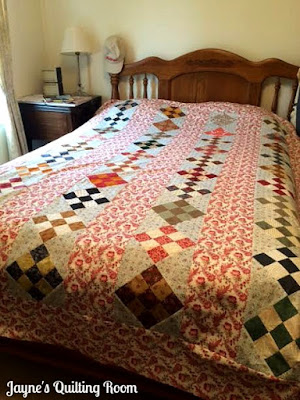 #8 ~ 9-Patch Strippy - I began making 9-patch blocks by hand just to have something to do when I was unable to be at the machine. The fabrics in these 9-patches are all scraps. After a good number of blocks had piled up, I needed to figure out what to do next with them. The strippy setting has always been a pleaser for me, and the two fabrics I used were in my stash, so this is an entirely stash- and scrap-created quilt top. Finished the flimsy on April 22 for the April UFO. 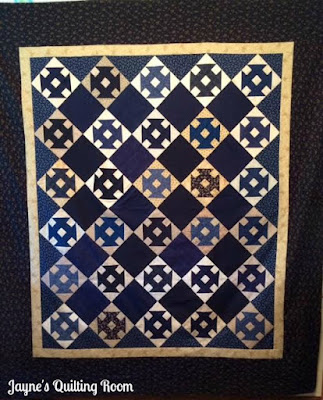 #9 ~ Navy Monkey Wrench ~ The blocks were all hand-stitched back when we were going to track and XC meets. I put the center of the top together but found that I did not have enough suitable navy for a border. I found what I needed in Terry's stash sale last fall, so this was easy to finish for the May UFO. 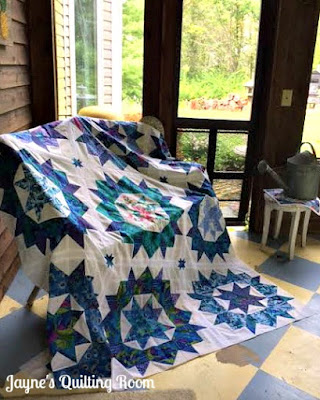 #10 ~ Swoon ~ Begun in the spring, it took me until early July to get the final 2 blocks made and then sew together the quilt top. Made of random Kaffe Fassett blues. 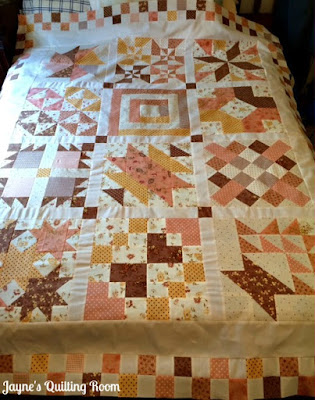 #11 ~ Wishes, my July UFO, finished on July 25. I began it as a quilt-along in 2014; had just two blocks to make along with the borders, which were sort of devilish. 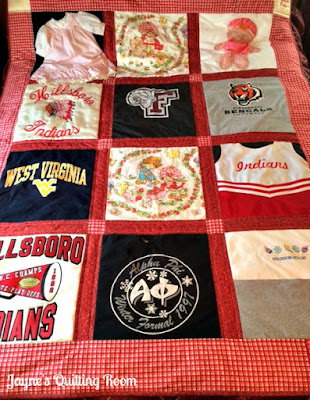 #12 ~ Shirley and Elizabeth's Quilt ~ Shirley gave me the parts for Elizabeth's quilt back in the winter, but I didn't get around to working on it steadily until June/July. I delivered it on July 21. 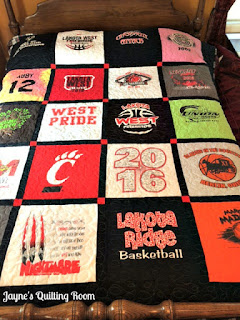 #13 ~ Gale/Leisure Quilt ~ Worked on this commission in the summer. Delivered in early August. 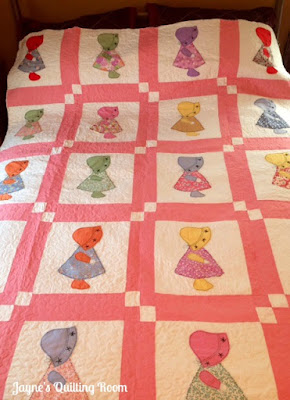 #14 ~ Callahan Quilt ~ This came to me as a quilt top; the maker was soon to be turning 90 or 91, and the daughter wanted to present this finished as a surprise. I repaired a few spots, had it quilted, and did the binding by hand. Delivered in August. 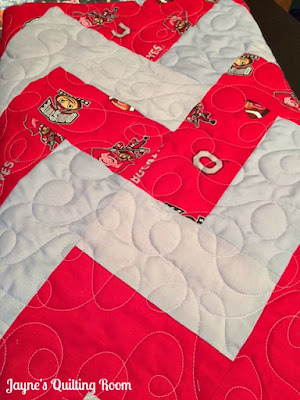 #15 ~ Baby Wyatt Schmidt Quilt ~ Wyatt was born in January; I began this in March; I quilted it in September. Maybe he will get his quilt by the end of the year. *smh* (Big brother Cade's quilt.) 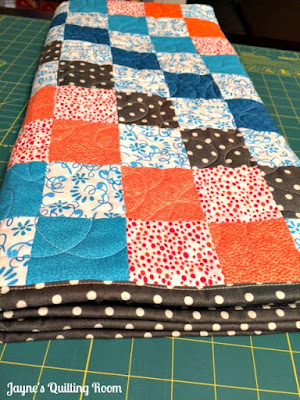 #16 ~ Baby Parker Davis Quilt ~ I began this quilt in March, the same month Parker was born; the fabric is all leftover from his older sister Jackie's baby quilt; they are using the same nursery, so the colors still work; I quilted it in September; to be delivered. 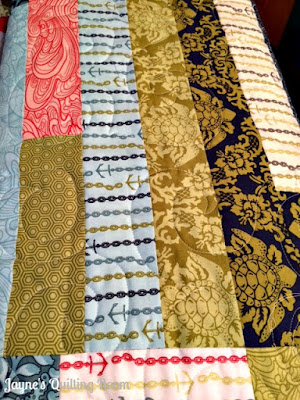 #17 ~ Baby Robert Schrader Quilt ~ Robert was born in July, the third child in the family. His two older sisters (Nora and Cecelia) have quilts made especially for them, but in typical 3rd child fashion, Robert gets a quilt I had on hand. The deep-sea-themed fabric called Neptune relates to the Schraders as they enjoy scuba diving; it may be a stretch in calling this suitable for a baby quilt, but there you have it. Made the quilt top in 2016; quilted this September. To be delivered. 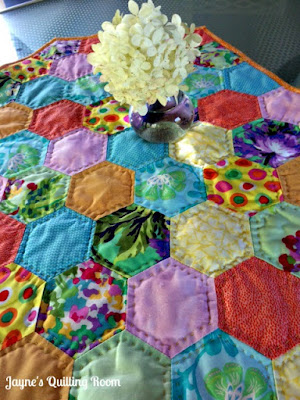 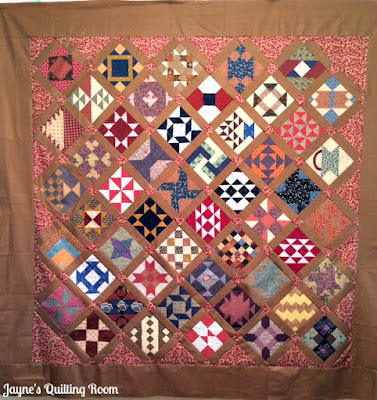 #19 ~ Farmer's Wife Sampler Quilt - started so many years ago; the original is double this size, but I just couldn't make myself do more. So it's a nice square couch quilt.This was my September UFO, finished on Sept. 29. 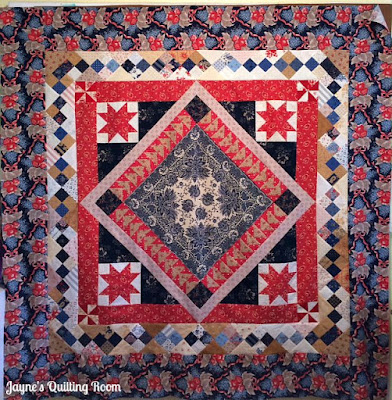 #20 ~ Flag Day Farm Medallion Quilt ~ Ten years after buying that center panel, I have finally made the quilt as I always envisioned it; this was supposed to be finished in June as my UFO for that month, but I missed that deadline. Finished on September 29, just a couple months late. 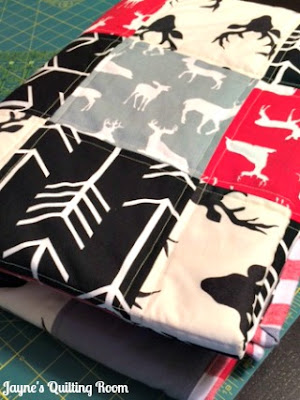 #21 ~ Emma's Woodlands Baby Quilt ~ gift for Geoffrey's sister. We both stitched the top; I took care of the finish. 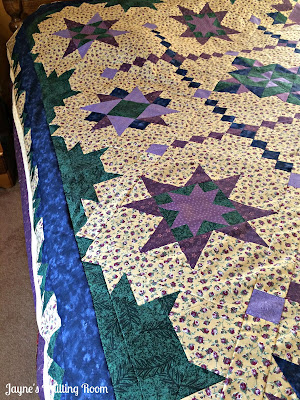 #22 ~ Tell It To The Stars - the October UFO. What a lot of bother for borders! I think they look really awesome, but I'd just as soon put the straight, normal borders on and taken the easy way out. Finished on October 31. 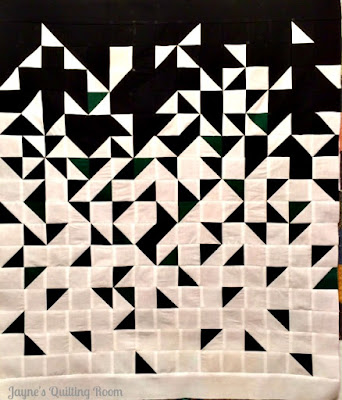 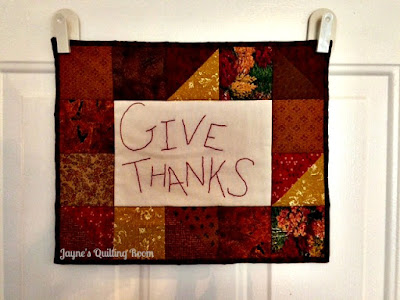 #24 ~ Thanksgiving Mini Quilt ~ Saw an inspiration mini at Terry's, so went to work and made this for myself. November 11-12. 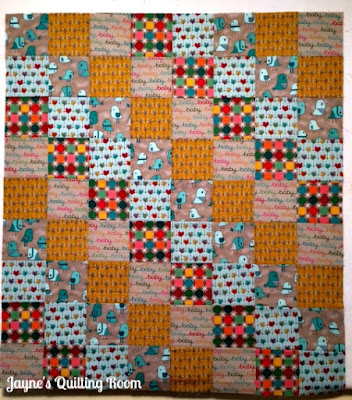 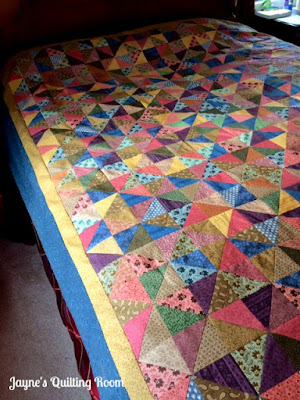 #26 ~ November UFO - Dusty Trails ~ Begun ages and ages ago; simple broken dishes block using old pioneer-influenced fabrics all in the stash for ages and ages. Glad to get this one done at last! 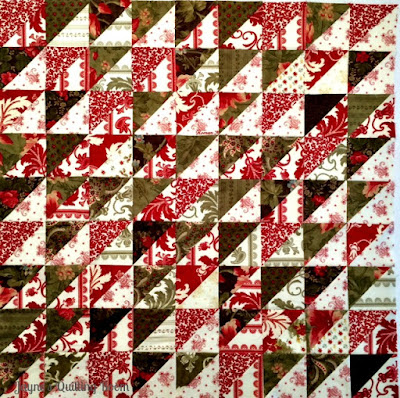 #27 ~ Roman Holiday HST Table-Topper ~ On an absolute whim, I pulled out the remnant tub of my Roman Holiday fabric. I found a nice stack of squares already marked for making HSTs, so I did. This is the result. Done on Nov. 28. 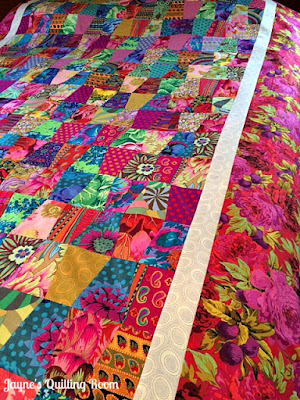 #28 ~ December UFO - Large Tumblers - I completed all 12 months of the UFO challenge! This one was relatively easy and was a perfect way to end the year-long challenge. 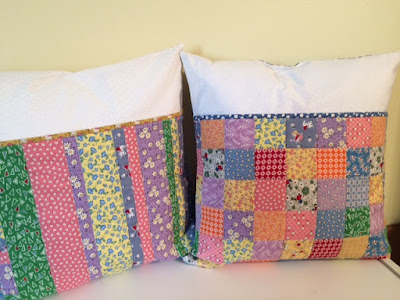 #29 ~ Christmas Gift to Mom - Pillow Pockets. I quilted the panels on the front, then added them to the front of a basic pillow cover. The front is white-on-white; the back is a 30s print. I inserted books into each pocket as part of the gift, as well.