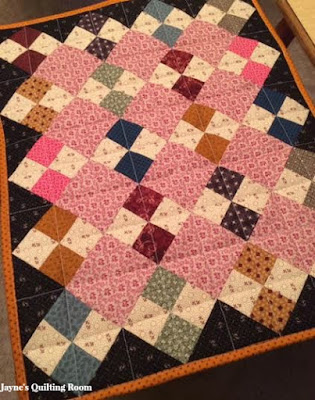 #1 ~ 4-Patch Doll Quilt; made up pattern based on Pinterest picture; quilted and finished on Jan. 16. This little quilt got a red ribbon at the 2016 Ross Co. Fair. 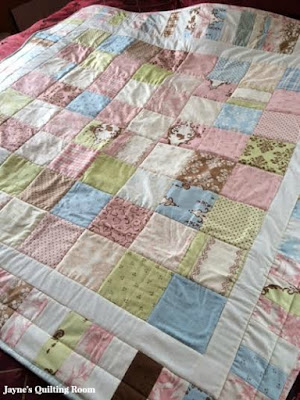 #2 ~ Cece's Baby Quilt; top was made in August of 2015; quilted and bound it on Jan. 30. Delivered to Vickie (Cece's grandma) for eventual delivery to Wisconsin. 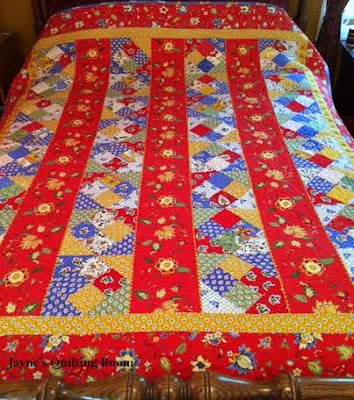 #3 ~ New Year's Resolution quilt for January - finish a quilt top every month this year - Vincent. It makes me happy to see it finished. 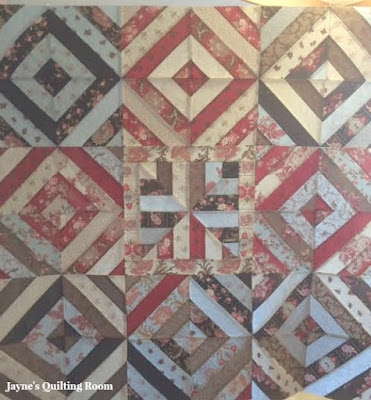 #4 ~ Summer Breeze quilt top. Made with Claudia and Denise in one of the classes they came for. My center is "invented" as I ran out of my fabric options. (Imagine that.) 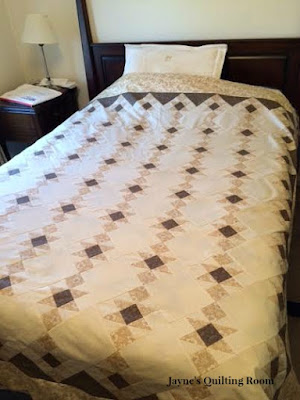 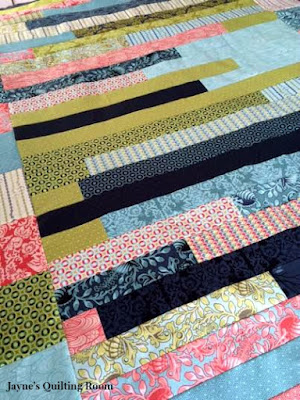 #6 ~ Neptune Race Quilt Top - I made the center portion last year, and never got around to finishing it with the Charm Pack borders until early this year - January or February. 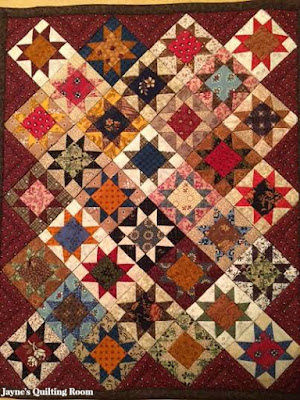 #7 ~ Pincushion Stars - by far the tiniest pieces I've ever used to make a quilt. The entire little quilt measures less approximately 12"x14" making each of those 32 stars about 2" square.Yowza. But I love it, and I'm glad I stayed with it, despite those tiny pieces. This little quilt got both a blue ribbon and a best of show ribbon at the Ross Co. Fair. 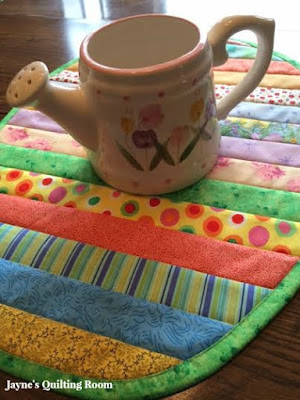 #8 ~ Easter Egg Table Topper - made in about 3 hours after seeing a similar picture on Pinterest. I didn't have an extensive collection of pastels, so I used brighter spring colors, and I think it finished just fine. 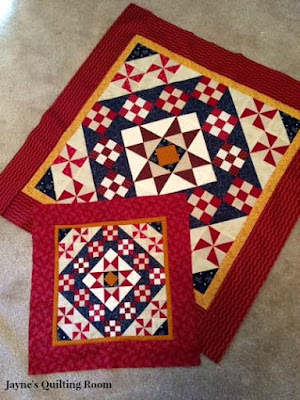 # 9 and #10 ~ Market Day small and Market Day large - I saw the quilt on another blog I follow (Humble Quilts). Her details included the 'free pattern' part, so I went searching and found it. A week or so later, I had my tops finished. The designer is Pam Buda. 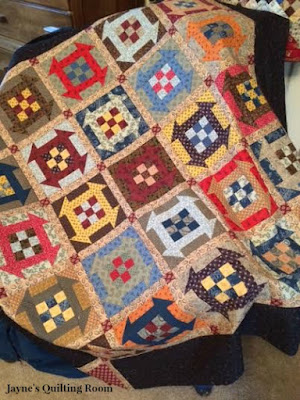 #11 ~ All In A Row - this was a fun quilt-along that we did at the April Canter's Cave retreat. I had my cutting done before arrival, and sewed the entire quilt top during the 2.5-day retreat. It's a pattern by designer Kim Diehl. I later went back to it, removed and reattached the borders, as they were 'wavy'. It suits me now. 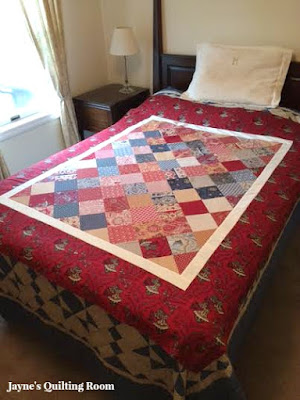 #12 ~ Chock Full O' Charm - Made with Sharon using 3 charm packs of French General fabric and yardage picked up on sale at Old Town Fabrics. Fun and challenging. Made on May 11. 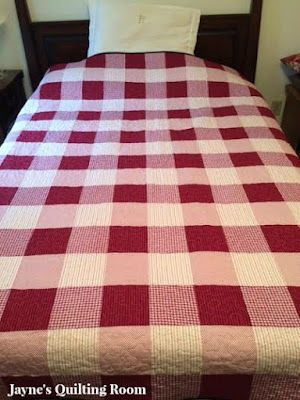 #13 ~ Abby and Stephen's Wedding Quilt - Made with fabric from my stash, including some that was my mother's and my grandmother's (Abby's grandmother and great-grandmother). Delivered to newlyweds the week after their honeymoon. 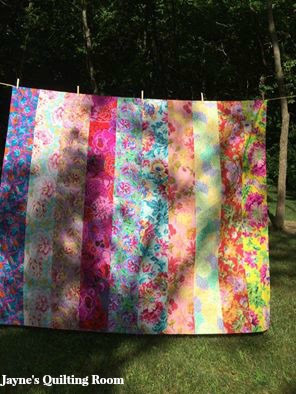 #14 ~ Floral Columns Summer - Made June 28 with Sharon and Kay to celebrate both Kaffe Fassett and summer. 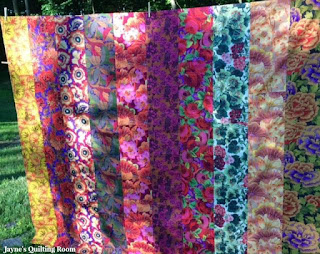 #15 ~ Floral Columns Autumn - Made June 29 on my own; I plan to use this as the reverse side of quilt #14 so that I have a reversible quilt. 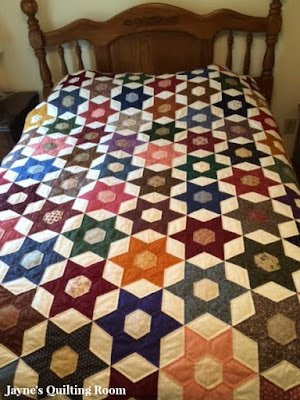 #16 ~ Scrappy Six-Point Stars - Totally handmade. I began piecing the stars back in the late 1990s, pieced the top several years later, and hand-quilted it in 2015-16. This quilt won a blue ribbon at the Ross Co. Fair. 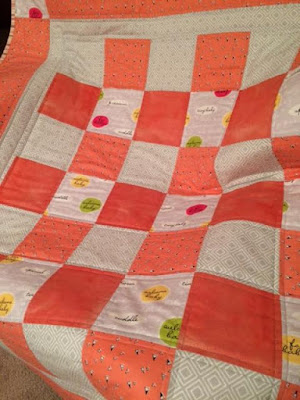 #17 ~ Molly's Baby Quilt - Little Ella was born in July, but she didn't get her quilt until mid-August. As requested, the quilt is peach and gray; I had a lot of fun making this quilt, and should never have dragged my feet on finishing it. 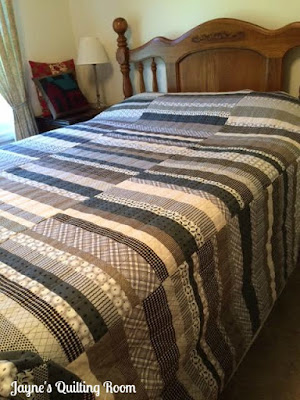 #18 ~ Elisa's Quilt ~ Early in the year (March, I think), Elisa Friedman asked if I'd make her a king-size quilt that would serve as both a bedspread and something snuggly to wrap up in. We collaborated on designs and colors. I bought the fabric in Jackson when I was at the Canter's Cave Retreat. I worked in spurts, and finally in mid-September, I delivered the finish. It is a one-of-a-kind design that I machine quilted on my little Bernina. I learned a lot about quilt-as-you-go, which I'd never done before, and I learned that I am not a very good person to "hire" for timely work, as I procrastinate more than I ought. 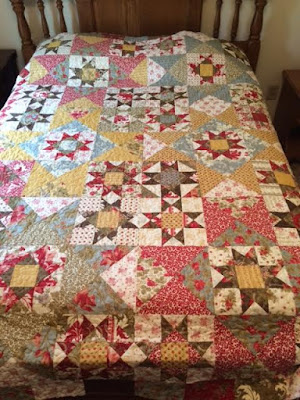 #19 ~ Eventide ~ I made this quilt top a few years back and had it quilted as part of my 2016 resolution to get a quilt top quilted each month this year. I fell short in meeting that goal, but I am glad that this is now quilted. I displayed it at Christmas time. 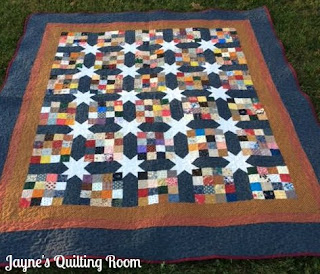 #20 ~ 16-Patch Stars ~ Another quilt top quilted for the resolutions. I hand pieced the 16-patch blocks and sewed the rest by machine. I added quite a bit of size with the 3 borders, but I love how they look. Since I sort of invented this as I went, I am really quite proud of it. 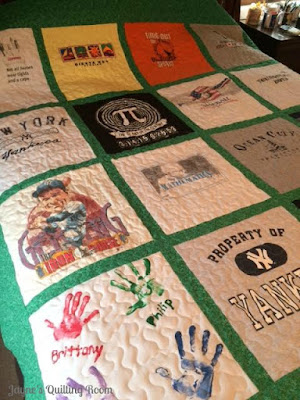 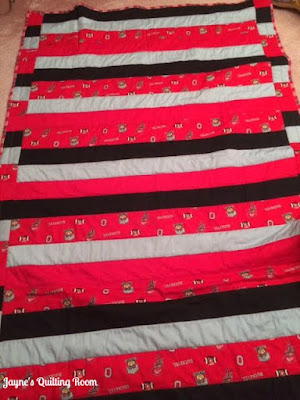 #22 ~ Buckeye Lap Quilt ~ I gave this to my mother for Christmas, even though whenever I wrote about it on the blog, I said it was a baby quilt. (Christmas fibs don't count, right?) I do plan to make that particular baby a Buckeye quilt, but all along this was intended for Mom. Machine pieced and machine quilted by me. Finished in December. 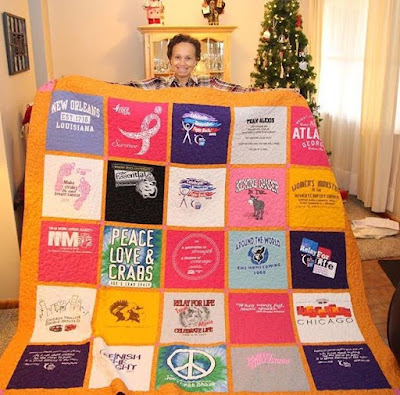 #23~ Alexis Cousins Quilt ~ A special treat for me was being asked to make this quilt for Devin and Heather Cousins. It was a Christmas gift from Devin to Heather; they were both pleased with the results. I am, too. Finished in mid-December. 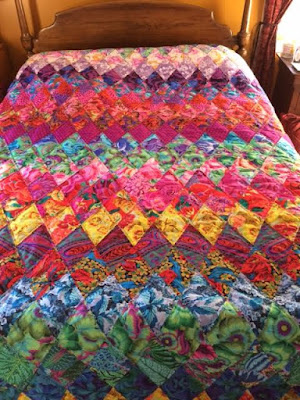 #24 ~ Erin's Diamonds ~ Finished December 30. I made the quilt top in 2013, and promised to hand quilt it on Grandma's old quilting frame. I set up the frame in October, just as Kevin was beginning to paint the main floor of our house. I removed the quilt from the frame on Thanksgiving weekend, and finished in an oval hoop. It is a quilt made for Erin, and will be handed off to her ASAP.