On Saturday, the Mr. and I took a day trip to Marietta, OH, the site of the first land office in the Ohio Territory. We are quite enamored with the town and all its accompanying history since reading David McCullough's The Pioneers last winter.

Situated on the Ohio River, Marietta served an instrumental part in US westward expansion. The first building and fort were built in 1788; remarkably many remain yet today. A number of fine, stately homes  adorn many of the downtown streets, several of which were built by Revolutionary War generals sent to the Ohio Territory by George Washington himself.

On our earlier visit to Marietta, we were too late arriving to get to tour the Campus Martius Museum, our main objective for Saturday's visit. Even in the midst of so much history significant to our nation's founding, the quilter in me was just as captivated by the textiles on display in the museum. 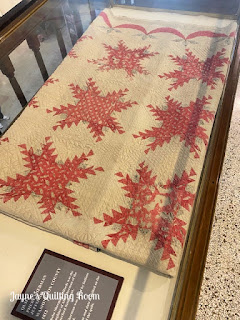 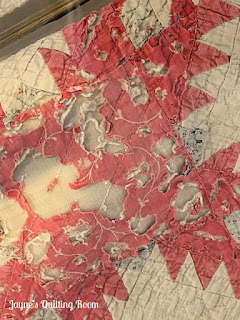 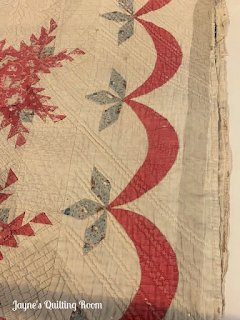 This beautiful red and white feathered star quilt was made by Phebe Sherman Jeffords in 1812. According to the accompanying information, her name and date are stitched into the reverse of the quilt. Isn't that border remarkable? The decay is rather extensive, and I am glad the museum can give it the care it deserves. What a treasure. 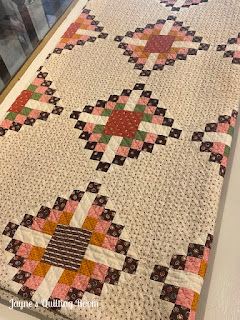 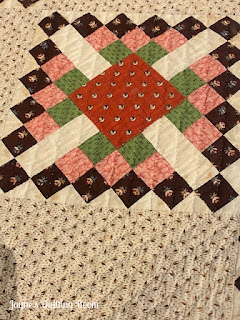 By comparison, this quilt looks relatively new. The condition is quite remarkable really. Yet, it has some age, despite its pristine condition. The sign explained that the quilt belonged to Susan Burlingame Pratt, the great-granddaughter of Rufus Putnam, one of the founders of Marietta. She was born in 1821 and married Henry Pratt in 1857. The block is called Chimney Sweep; the fabrics are dress scraps. 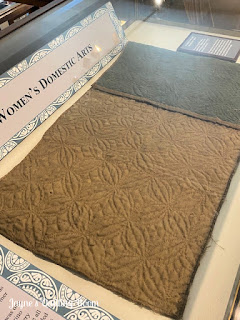 Scant information was available for this baby quilt. The sign says simply late 18th early 19th century. The fabric appears to be quite rough - perhaps homespun or wool. No fancy piecing, but that stitching makes up for the plainness of the fabric. 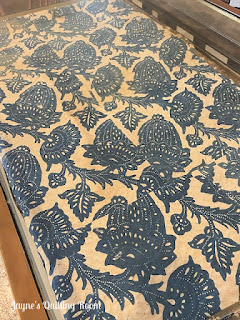 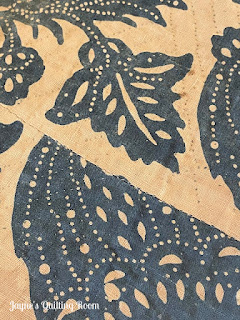 This whole-cloth quilt was interesting to study. Here's what the sign said for this 1750-1800 specimen, "This quilt is believed to have been manufactured in the last half of the eighteenth century and uses a floral pattern for its design. The materials used to construct this quilt are composed of natural fibers and dyed using a resist process and natural dyes. It displays some minor repairs from years of service and is typical of what might have been used by many families during the early settlement of Ohio." 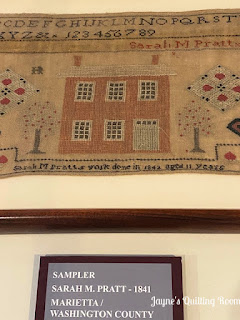 Not all the textiles were quilts, as the cross stitch sampler above shows. This beauty was made by 11-year-old Sarah M. Pratt in 1841 or 1842 (depending on the source - do you see the discrepancy?) 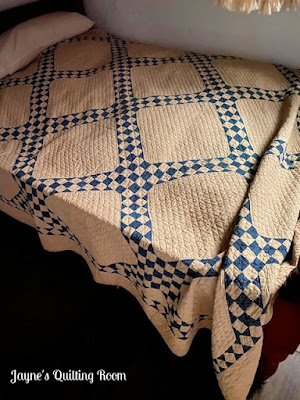 One special treat in the museum is the home of Rufus Putnam on its original site. It is decorated much as it would have been all those many years ago, with a beautiful blue and white quilt on one of the beds.
We began a big kitchen remodel yesterday, so between my classes and the remodel, stitching might take a secondary role. I hope not; we shall see. I definitely plan to share before/after pics here.
Happy Quilting, Friends!

Posted by Jayne Honnold at 7:00 AM

Can I Get A Whoop Whoop