Trying to have a quilt retreat in the year of the pandemic - what a ridiculous notion! Ours was scheduled for early April, canceled, rescheduled for late August; canceled and finally modified to meet more of our schedules by staying close to home. Terry hosted the retreat at her house! I think I speak for the entire group that it was a roaring success. 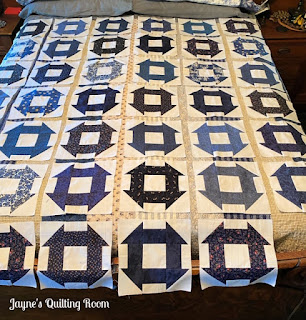 My week of stitching culminated in the blocks you see above. My goal as we began the retreat was to make all the blocks for True Blue, a churn dash pattern by Linzee Kull McCray. I have had the pattern for a couple of years, and this quilt has been on several to-do lists. Now, I finally have it started and will work on finishing the flimsy in the coming week. I made 40 blocks (42 needed), so I will get the additional blocks made, and then commence with the setting strip and cornerstones. A neat-o secondary design will appear. 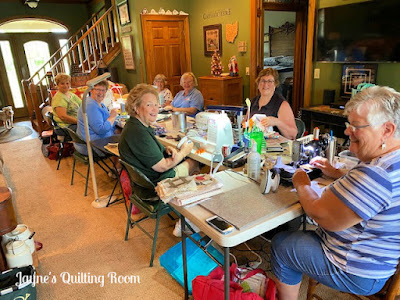 Here's our little group. All 7 of us were present on Wednesday, so we hijacked Terry's husband to take some pictures for us. Some of us made it for partial days while others had to miss entire days. We took turns with lunch provisions M-W, and ordered from a local restaurant the final two days.

I did not make an effort to document what each of us worked on; instead, I have only documented my own project. From Monday through Friday, here's what I accomplished.

Largely, the time was entirely filled with making those churn dash blocks. I had parts prepared in advance for some, but not all. Had I truly been in chain-piecing mode, I would have made much faster progress. I won't complain, though, that I didn't do enough; the enjoyment of the week was too great to complain. We had the very best week of sewing fellowship. This group is already tight-knit; we are even more so after spending the week together. *All the good feels!*

I have worked out my goals for September; maybe I can get myself back on a better blogging schedule and share that with you soon. Have a great week!

Can I Get A Whoop Whoop