I have spent about a week trying to figure out what I want to work on. There are all those things I ought to do, but there are also those things I want to do. The latter category generally involves starting something new. With so many projects staring at me from every corner of the sewing room, I just couldn't let myself begin another new project. So Wednesday and Thursday, I did this. 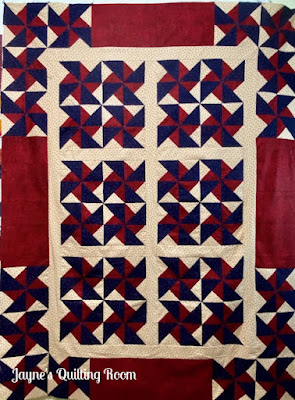 The box containing the parts for this quilt have been moved around the sewing room for a couple of years now. It came to me from Grandma back in 2014 when she sent all her sewing and quilting stuff home with me. This post details that memorable event. Ever since, I have wanted to finish this, but I just didn't know how.

Here is a post in which the pinwheel blocks - and a lot more - are shared. In that post, I wonder why she stopped working on this. It has many elements that appealed to her - patriotic, traditional block, use of her existing stash. After a good deal of study, I think I figured it out. She had made 24 pinwheels going one direction, and 16 pinwheels going the opposite direction. I think that when she tried to put the quilt top together, the differing directions displeased her, so she stopped.

That's what I would have done, too.

Well, instead of looking back at the history of these pinwheel blocks and all my inactivity, let's move forward! 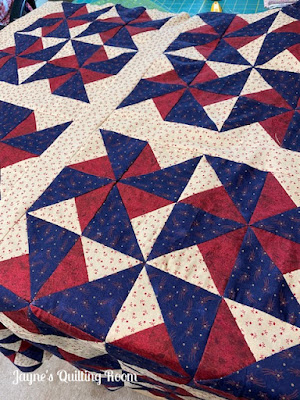 It took collaboration with a few of my quilting cohorts, and a couple of days of work, but by gosh, I have finished it!

My conundrum was trying to figure out how to deal with pinwheels going in opposite directions. The project box contained extra fabric, so I sorta' guessed I would make additional wheels, but I managed to figure out an alternative that didn't require that. Here's the quilt top again; I will draw your attention to the 6 center blocks which are actually 24 pinwheels. All those pinwheels rotate the same direction. I added the sashing strips all around them, and then tried a number of options for the remaining pinwheels. If you study them you can see that they rotate in the opposite direction of the center pinwheels. This was the problem that most likely forced Grandma to halt her work on this quilt.

Placing 4 pinwheels around each corner seems like a pleasing end result. I do not focus at all on the fact that the directions are opposite - instead, it all looks like it was meant to be arranged in this way. This quilt is suitable for a lap quilt or a couch quilt. It measures approximately 49" x 66". The individual pinwheels are 7" finished.

Because this is one of the very last few things Grandma worked on before she quit quilting, I wanted to document some sweet features. First of course, is her hand stitching. Each of the pinwheels was stitched by hand the way she did for every quilt she ever made. 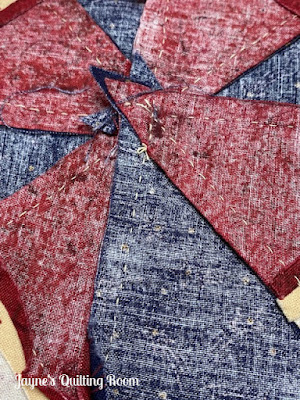 While cutting the red fabric for the border, I discovered some of the pencil marks she made for cutting out the triangles. She would have had a template and used a pair of scissors to cut the units for each block. 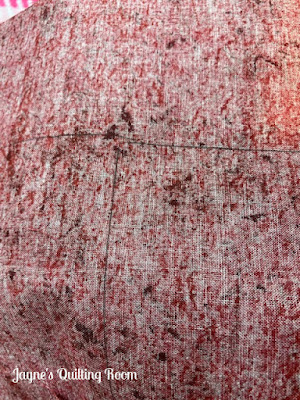 Her project box was neatly packed with all her blocks as well as all her remaining fabric to be used in finishing the quilt. The plain blue fabric folded here was her alternate; the print blue was almost all gone, so she had a back-up plan ready, if necessary. Just like her, for sure. 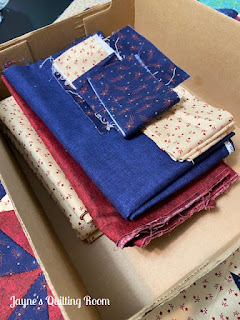 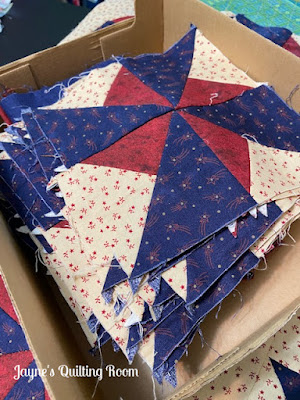 I will definitely be putting this on the quilt frame soon. I can see this being finished off without delay.

Hope you have a great Friday!

Posted by Jayne Honnold at 6:30 AM