At the beginning of each year I make a goals list of quilts I most want to make by year's end. It's my quilter's version of new year's resolutions. The quilt I am working on now is from that goal's list, and it makes me very happy to be delving once again into the Kaffe Fassett tubs of fabrics. 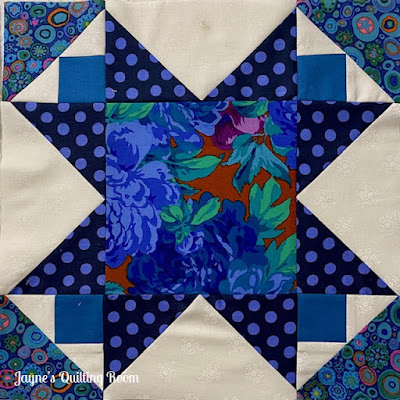 For the longest time, this star and three others similar to it, lived on my design wall - like from January through June. Then my attention focused on our sew along, and then on Irish Chains, and all manner of other projects that crossed my radar. Here is a reference post from when I made the earlier blocks.

The "blue Kaffe" as I referred to it was never far from my heart, though, and this week I have returned to it with my entire focus! As excited as I was back in January to make this quilt, I sure have delayed in returning to it - 10 months!

The longer I spent away from this project, the more my angst grew concerning all the units needed for making more of these blocks. Sometimes, when I know there will be a lot of unit preparation, I tend to allow the task to become daunting. The units on the corners were particularly worrisome, as the measurements for all those smaller parts would be tricky. The units that make the star points are flying geese, and I knew I could locate directions for chain piecing those using a no-waste method, but still that was yet another 'chore' - it's like I expect these units to magically appear from my sewing machine or something. I definitely made it a bigger deal than it was. 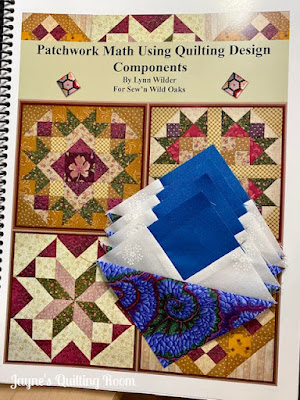 Lynn Wilder of Sew'n Wild Oaks blog came to my rescue. A purchase I made from her Etsy shop earlier this year included her book Patchwork Math. This handy workbook-style manual helps quilters figure sizes for units just like those needed on my star block. A title with the word 'math' in it doesn't seem like something I would ever buy, but most likely, Lynn wrote the book for quilters like me who have a general aversion to math.

With careful study and careful measuring and cutting, I am proud to report that the corner units have been completed successfully. 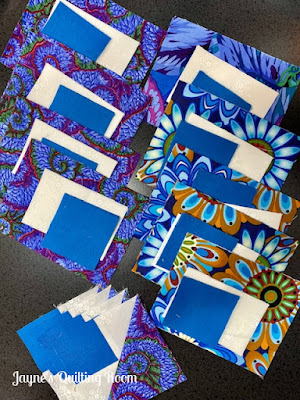 I cut all the required pieces for 10 blocks, then proceeded to make just one set - the instructions make 4 at a time, which is nice since 4 are needed for each block. Once that trial effort was finished and measured accurately, I went about chaining the rest. Whew! finished like a dream! 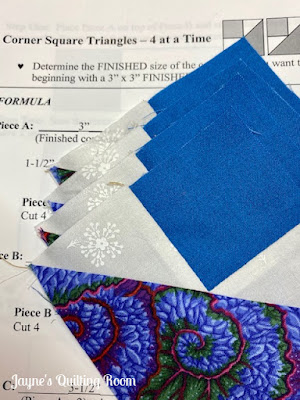 I learned that this unit is called a Corner Square Triangle. The size I needed for my star blocks was a 3" square unit, and her example instructions were for that exact size - so I really didn't do any 'patchwork math' - but we will trust that I can do the required math next time, right?

I will be testing my formula conversion (math) with this next unit - flying geese, which is also covered in this book. My size does not match her example. Oh well, here we go! Wish me luck!

Posted by Jayne Honnold at 9:54 AM