Retreat was a total blast. We had the best week, and some of us are proud to have awesome finishes. Since news about retreat could go on for awhile, I will divide things up and share tidbits over a few posts. First up, one of my finishes. This was quilted just before heading out to retreat; I finished off the binding at retreat. 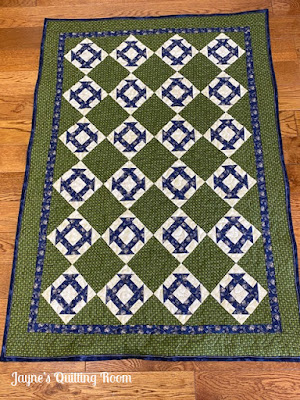 A popular, trending term these day is "influencer." This quilt is totally the result of being influenced. It's not a new concept; people have been influencing one another since forever, don't you think? I know other quilters have certainly influenced me. One need not be an internet rock star or social media sensation to be an influencer. Here's how I was influenced.

First, retreat friend and fellow Frankfort Girl, Sheryll, made an adorable little churn dash quilt years ago that I have admired often. Below is a picture of Sheryll's quilt taken at the Ross County Fair, where it won a red ribbon. Long time readers know I am a sucker for churn dashes. 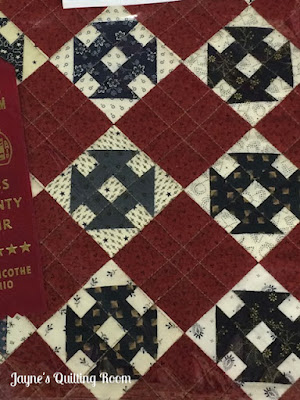 At a later retreat, Laura, influenced me when I learned that she was a big fan of "poison green" - a popular quilt fabric color in reproduction lines. I'd never considered using it too much, but Laura made me aware of the power of certain colors in quilts. There's the second "influence."

The final influence came from Sheryll again, at yet another retreat. She had the brilliant idea to meld these first two ideas into an absolutely gorgeous finish. Small churns plus poison green - quite the winning combination. 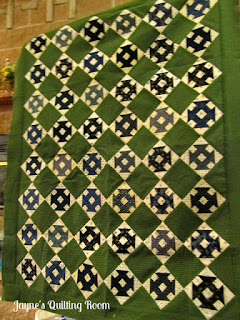 Totally INFLUENCED!  And happily so. Wouldn't this influence you?

I quilted my little quilt last week when working out tension problems on my long arm. It took just part of a morning at retreat to bind it. My quilt is smaller and my churns are slightly different proportions than Sheryll's, but still, I am so happy to see this finished. 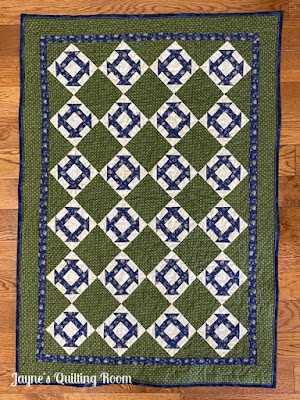 Yes, retreat was a resounding success, I think it's safe to say. I will do more reviewing in my next post.